(This was written for Film Score Monthly's blog and is also posted there.)


True story.
I walk to the back of a huge warehouse into the confined, fume-filled finishing room. I get the attention of David, the busy man in charge, and ask him my question (it’s about putting glaze on a cabinet door, if you must know). He asks if I have some time to wait, then sprays some noxious finish on my sample door.
I stand around waiting for it to dry. He gets back to his business, pausing only to press play on the portable cd player perched on a shelf beside bottles of stain. The music begins. It’s instrumental, which immediately draws my attention. It’s not country or pop or anyone singing at all. And it’s not classical either, not exactly. I can’t place it -- but I know film music when I hear it. So I ask him what we’re listening to.

“Mask of Zorro,” he replies.
I freak out a little, inside at least. If you’re here on this site reading these words, you know how rare it is to hear film music being played anywhere other than your own stereo.
“You listen to a lot of film music?” I ask, trying to draw him out.
“Not really,” he says. “I like this one. It’s by James Horton.”

I bite my tongue, then, “You listen to a lot of Horner?”
“Nah,” he says, measuring out a custom stain color. “If you’ve heard one, you’ve heard them all.”

I laugh out loud and actually do a fist jab into the air.
“I have a friend who listens to a lot of this stuff,” he continues, “and I like this one, but all of Horton’s stuff tends to sound the same. He seems to have just one bag of tricks he uses over and over again.”
In my mind, I see all those message board threads, all the back and forth, and I hear the danger motif in my head and I recall my own first experiences with Horner. I actually saw Battle Beyond the Stars in the theater and just loved the score. For a long time I thought that if I could only have that soundtrack album, I’d be happy. When I got it, I laughed with glee at the flubbed notes during Cowboy and the Jackers and thought the opening French horn trills were thrilling and unexpected and my girlfriend, who played French horn, agreed that the score was a lot of fun to hear. I remember getting excited seeing Horner’s name on the Star Trek II poster, and joking with my girlfriend that maybe we’d hear those French horns again. Little did we know…
Back in the warehouse, I eventually asked David if he ever listens to Jerry Goldsmith.

“Never heard of him,” he said. “What did he write?”
I’m pretty sure I now know exactly what the word “aghast” means. Sadly, I was so flummoxed that I couldn’t come up with anything. I eventually coughed out, “Uh, the first Star Trek movie, uh, Patton…” and then all I could think of was The Thirteenth Warrior, which I was currently listening to in my car, and other similarly obscure titles. Mercifully, David interrupted my train of thought.
“No, I don’t really care about that old stuff. Who did National Treasure? That one’s great.”

Sigh.
This happened to me last week. My purpose in relating it is not to reopen the various Horner self-plagiarism arguments or start a round of bashing Media Ventures or whatever it is they’re calling themselves these days. No, I just wanted to share because even as we think of ourselves as a tiny group of aficionados, as much as we sometimes feel like musical outcasts in a pop culture sea, there are others out there. There are regular folks out there who like one or two scores, and that’s about it. They don’t need to own every Trevor Rabin score. They just like to listen to National Treasure. They have a favorite Horner score and they couldn’t care less about Jerry Goldsmith. And it’s okay. It’s what makes this music so great. It doesn’t always just disappear amidst the wall of sound that most movies have become. Sometimes a score can pop out and grab the attention of someone who normally wouldn’t care less. And that person will seek out that score and it won’t be just the hardcore Rabin completists who buy the cd. Sometimes it’s just a guy who likes what he heard in one single movie.
And next time, maybe he’ll perk up when he sees the composer’s name in the credits. And later, he’ll form some general opinions and maybe, just maybe, one day he’ll stumble across this wonderful little place called Film Score Monthly.
Then we can finally start ramming Goldsmith down his throat…
Posted by That Neil Guy at 5:27 PM No comments:

So here's the whole deal on this breakfast challenge. I lined up the ingredients. 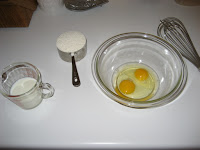 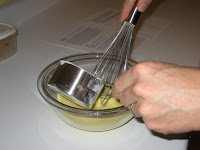 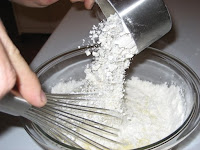 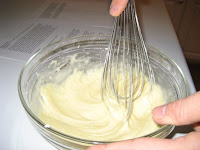 And I realized I'd pout in a whole cup of flour instead of half a cup.

So, I set that bowl aside and started over again. From the beginning.

Now, I finally tossed the butter into the hot pan. 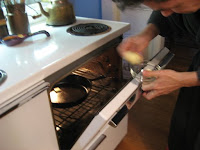 Then pulled it out. 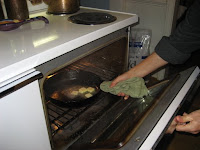 Swirled it a bit. 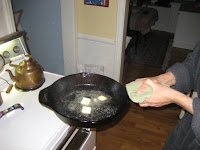 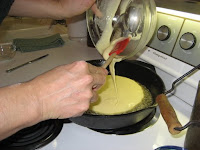 And stuck it in to cook. 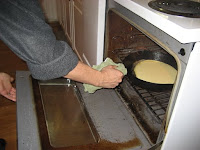 Then I couldn't just throw out the other batter, so I tossed in a bit of brown sugar and sprinkled in some baking soda and tossed it into lumps on a baking sheet. 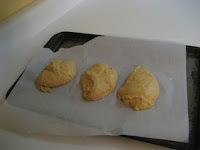 The pancakey thing cooked, sort of rising, but not really a whole lot. 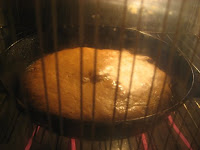 Then I took it out and it deflated even more and was a sort of flat thing which was okay with powdered sugar and syrup all over it.

Then I baked the lumps for a bit and ended up with this. Pretty bread like and a bit bland, but tasted great when each bite was smothered in raspberry preserves. 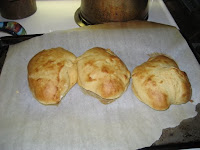 And thus ended the day's cooking adventures.
Posted by That Neil Guy at 8:04 PM No comments:

Well, mine didn't puff up anywhere near Charlotte's. 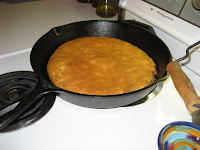 Kind of tough and bland. 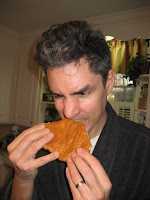 Why write this up myself when Charlotte has already done it so well?

So, That Neil Guy has issued a culinary challenge. (Not so much a challenge really, but it sounds cooler to say it that way, like he took off his oven mitts and slapped me with them or something.) Anyway, he was intrigued by this recipe, and will be making it this Saturday morning. He asked me to make it as well, to see if we get similar results. Since it is a baking experiment, it is likely that we will have wildly varied results.

The funny thing is, this is a recipe for a Dutch Baby. AB made a Dutch Baby on his "Popover Sometime" episode and I was really intrigued by it. It looks like a ginormous Yorkshire pudding.

Tune in Saturday to see us go dutch, baby.
Posted by That Neil Guy at 5:07 PM No comments:

From the vaults, a student project by Michael Crawford & I, starring the fabulous Andy Williams and the president of our college, Harry Smith. This is dubbed straight from the original VHS tape, warts and all. It's a leisurely paced thing, I'll say that, and the end credits seem nearly as long as the film itself. But it sure was fun to do. Too bad that Michael couldn't get any daytime train footage. We once reshot a couple of scenes, but Michael has that tape and it's on 3/4 inch tape, I believe, so it may never see the light of day. Enjoy -- if you dare!

Inspired by J'Mel, I'm posting a short story I wrote a while back. Comments welcome.

I peered through the frost of the stasis tube, watching Frank Sinatra open his eyes.
Wow. They really were blue.
I popped the last of the fail safes and slid the tube open.
He blinked a few times before staring at me.
“Where the hell’s my robe?”
“Yes, right here, sir.” I’d rehearsed this enough times you’d think I would have it ready. But the shock of the reality knocked the wind out of my extensive training.
He slipped into the robe and examined the chamber.
“A man could die of thirst before he’s offered a drink around here.”
The Medbot produced a Jack and water. Three ice cubes.
Sinatra eyed the drink suspiciously before taking a sip.
“Okay. What is it this time?”
I cleared my throat. “Well, sir, we’ve become concerned over a growing trend—“
“You’re younger than the last one,” he said.
“Uh, yes, sir.” In fact, during the last Sinatra Crisis, some four hundred years earlier, Benson himself served as Technician In Charge. The legendary Benson, the Technician who single-handedly salvaged the Facility after the Grid Wars, must have been nearly 70 when that particular Crisis manifested.
Now we’d reached another obvious Crisis Point. And I knew I was no Benson. How could I possibly interpret Sinatra’s advice correctly? Benson had a lifetime to study the Roasts and hear the discs. I’d only just seen From Here to Eternity. What if his advice had something to do with The Tender Trap? I’d never know. Unless he mentioned Debbie Reynolds, I suppose.
“Hey!” He snapped me back to reality. “Let’s get this over with. My drink’s almost gone.”
“Yes, sorry, sir, I’ll get right to it.”
“You do that.” He walked to the window, staring at the snow-covered sands.
“We seem to have taken things in the wrong direction,” I began.
“Are we still in Palm Springs?” he asked.
“Yes, the remains of Palm Desert and—“
“Christ. You bimbos really screwed it this time.”
“Yes, sir.”
He drained his drink, removed a single ice cube, then handed the glass to the Medbot on his way back to the stasis tube.
“I’ve seen enough,” he said.
“But the climate, we’re not sure if this severe cooling is our fault or a natural—“
“Turn the tube back on,” he said. “I’m done.”
“But the crisis, sir. We need you. We need your help!”
“Here,” he said, tossing the ice cube to me. “Go skate on it.”
Posted by That Neil Guy at 4:31 PM 5 comments: