Dagger of the Mind

visits a penal colony where “enlightened” reform techniques turn out to be - surprise! – crazy mind control torture. James “The only good human is a dead human!

” Gregory stars as Dr. Adams, the head of the colony. Morgan Woodward is the psychotic Dr. Van Gelder with Marianna Hill as slightly cross-eyed babe of the week Dr. Helen Noel, ship’s psychiatrist.

Only eleven episodes into production and so much is already established. Kirk’s reliance on Spock and McCoy. Spock’s knowing look when Kirk sees Helen for the first time – and again when he discovers them embracing. The nerve pinch. The mind meld. 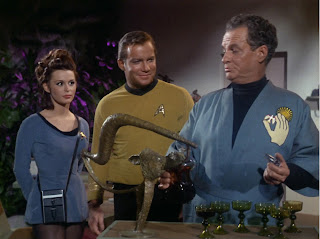 Actually, this is the first time we see the mind meld and, knowing what a trope it becomes, it’s interesting to see how much it’s built up before hand, and how differently it’s performed. In this outing, Spock avoids the side of the nose and the forehead, for the most part, and concentrates his fingers and energies nearer the outside of Van Gelder’s face . Spock hovers, slowly rotates around Van Gelder during the procedure, gets close and really feels it. He speaks of “we.” The ritual it becomes is yet to be and it’s an interesting glimpse at the evolution of what will become just another plot device in Spock’s belt.
You can also see, already, the blistering appeal of Spock. Nimoy is never less than mesmerizing. He’s us, but not-us. And he’s definitely a younger, less mature, more emotional Spock than we later come to expect. He’s certainly not the smiling, shouting, angry Spock of the earliest episodes, but he’s not yet the blank master of stoicism he’ll become.
And he’s a badass. When he beams down to the prison, he first checks on the knocked-out prison guy (nicely empathetic of him) then starts smacking control panels !wham! with his bare hands. Flip open the controls, flip some switches and voila, force field inactivated. Spock gets it done. Then its straight to Kirk’s holding cell where he gives the look as Kirk smooches on Helen.
Ah, Kirk. He’s already stronger than most men. “Van Gelder was crawling on the floor begging for mercy” but Kirk and his iron will hold back his mind like no other man can do. Yes.
In other news, they celebrate Christmas on the Enterprise. In the science lab. Which is an interesting comment about the conflict between religion and science in the 23rd century. And, speaking of that, is it the 23rd century yet? Two references are made to the idea that humans have been trying to deal with criminals for 40 centuries. So where does that place the Enterprise on the timeline?
When Dr. Adams finally gets exposed to his own creation, the mind-emptying neural neutralizer, he ends up dying, faced with the prospect of his own loneliness. Kirk feels the Doctor’s pain after having endured the device himself. His looks to Spock and McCoy at episode’s end show that he’s already counting on them as his conscience, as his real friends, the ones who’ll never desert him. This early in the run, we’ve already got a foreshadowing of Kirk’s “I’ve always known I would die alone” line from Star Trek V

.
From a soundtrack nerd perspective, I found it distracting in only the way I could, to hear the cut and paste spotting of familiar Trek music. But it was also delightful, like being reacquainted with an old friend, to hear it all in context again, not divorced from the screen which is the way I’m used to hearing it nowadays.
Love the crazy "sunrise behind gigantic hand of Apollo about to crush a dove" symbol on the penal colony jackets. And I love the fact that the penal colony has humongous air ducts at waist level running throughout the place.
The title itself comes from Macbeth.
Is this a dagger which I see before me,
The handle toward my hand? Come, let me clutch thee.
I have thee not, and yet I see thee still.
Art thou not, fatal vision, sensible
To feeling as to sight? or art thou but
A dagger of the mind, a false creation,
Proceeding from the heat-oppressed brain?
I see thee yet, in form as palpable
As this which now I draw.
A mind, it seems, is a terrible thing to waste.
Posted by That Neil Guy at 11:32 AM

Great post. I like how Dr. Adams is pouring 6 drinks in that screen cap. I guess he knows Kirk and Helen like to put a few away,(he must of heard about the Science Lab Christmas party).

Excellent analysis, Neil. Did you read my post about the USS Constellation Effect? :)

No, I don't recall seeing that! Would love to read it. Link, please...