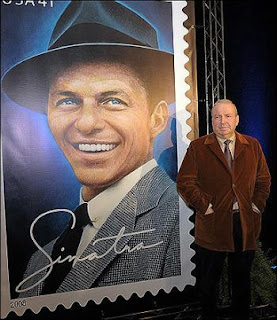 My friend Julie told me about a show she saw in Birmingham called The Rat Pack, Live From the Sands starring Frank, Dean and Sammy impersonators. This brings to mind a question she and I use to wrestle with a lot: is there a worse life than to be Frank Sinatra Jr? I mean, you're just doomed. There's no way to rise out of the shadow of greatness that is Frank. One of the times Julie and I saw the real Frank in concert, Jr was leading the orchestra and his old man just kept yelling at him all night.

But Julie presents an interesting dilemma. Here's a clip from Julie's email: "The show was meant to reproduce what it would've been like to see the Rat Pack on stage at the Sands. Had lots of bits like Frank and Dean rolling out "the lunch cart" stocked with Jack and scotch and bourbon and then proceeding to interrupt poor Sammy's song with questions like 'Who wants a sandwich?" as they mixed highballs. Oh hell yes. The guy playing Sammy looked and sounded a lot like him. We had the Frank understudy last night. Did ok belting out big numbers but, well, hell, how ya gonna bring even an iota of Frank's charisma to the stage? I pondered an inscrutable dilemma: Which is worse? Spending life as Frank Sinatra, Jr. or as a Frank Sinatra understudy on a touring broadway show about him in Birmingham? Weigh in on that one if you will."

3 blogs? If there isn't a name for that yet then somebody needs to coin it.

I think the worst would be impersonating Sinatra's son.

Jennifer thought that being the understudy to a Frank Jr impersonator would be the worst...