September 13, 1999. A massive nuclear explosion blasts the moon out of earth's orbit, sending it on a journey through the outer reaches of space.

Well, that was the premise, at least.

Even as a kid, I never quite bought into the idea that the moon could have left orbit by means of a nuclear explosion. It seemed especially improbable that the folks living on Moonbase Alpha could have kept flying past exotic alien planets on a regular basis. And the stories themselves, especially during the "action-packed" second season, tended to get downright silly.

But I loved the execution of it. Especially the Eagle Transporters. They always seemed so plausible to me. I wanted to build a cockpit in my room so I could pretend to be flying in one, but had to settle for a fleet of models. 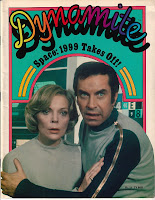 Okay, and I liked the costumes.

Which brings up the question: anyone else remember Dynamite magazine?
Posted by That Neil Guy at 7:52 PM